The latest Firefox version - 57 - does not work with the Bookmark Favicon Changer Extension which allowed users to use their own Favicons in the Bookmark Toolbar and its drop-downs, and its developer has decided that it is not practicable for him to rewrite it to work with this and future versions of Firefox.

Since I value having folders in my Firefox Bookmark Toolbar identified by Favicons without text I have searched the Web for a replacement but have not found one. I am not a programmer of any skill, and certainly could not write such an extension in any amount of time that I could afford to spend, but I have read suggestions from a lot of people, some of which work, but most of which require too much background knowledge to implement easily, and have produced a (fairly) simple fix which allows you to personalise bookmark, and bookmark folder, Favicons - but not automatically. It's rather more work than the extension but not excessively so. I have only tested it with Windows 7, so reports on how it works with other versions of Windows would be welcome.

Click to download the file, "userChrome.css", and save it in the "Chrome" sub-folder of your Mozilla AppData. You can find where this folder is by opening Firefox, selecting "Help" and then "Troubleshooting information", which opens a page which allows you to open the Firefox "Profile" folder in Windows Explorer. "Chrome" is a sub- or sub-sub-folder of "Profile". 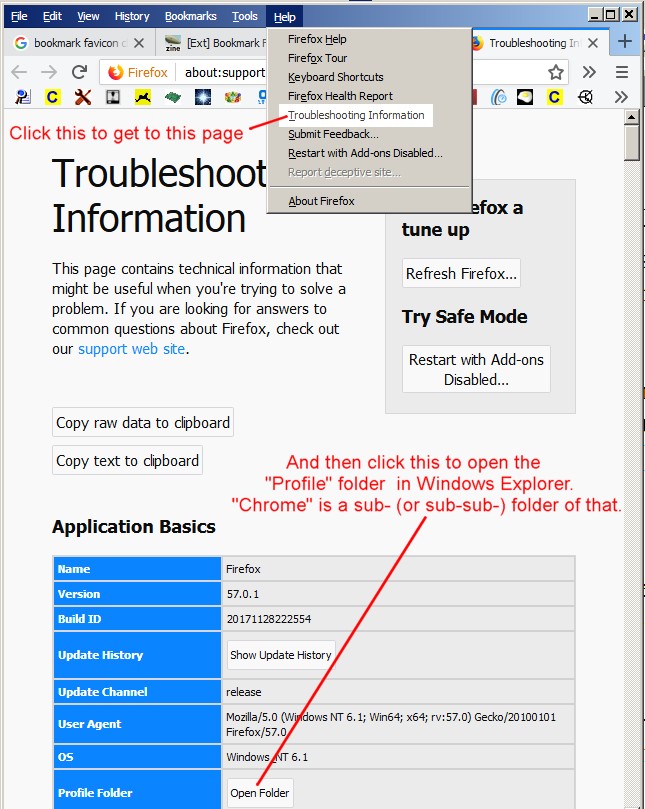 You must then (re)name the folders to which you wish to assign Favicons. Right click each folder which you wish to name, which may be in the Bookmark Toolbar or one of the drop-downs, and enter its name in the "Name" field - then press "Save".

To rename a folder right click it, rename it and save.

Give each icon the same name as the folder it is associated with. It will also, of course have an extension:- FolderName.ico, FolderName.png, or FolderName.jpg. The file userChrome.css as downloaded assumes that your Favicons are icon files - .ico - but you can edit the icon file names in userChrome.css to .png or .jpg (and possibly others - but you may not use animated icons). Use 16×16 pixel icons (or larger - but be sure that any larger icon you choose still looks well when shrunk).

All the Favicons must be saved in a folder called "icons" which is itself saved in "Chrome".

When you download userChrome.css it is preloaded with 100 folder names and 100 icon names, respectively Fxx and Fxx.ico, where xx is a two-digit number from 00 to 99. If you use these names, and .ico Favicon files you should not need to edit userChrome.css at all - just save it in "Chrome" together with the "icons" folder containing them, but if you wish to assign your own Folder Names, Favicon Names and Favicon file types you will need to edit a line for each folder. If you have fewer than 100 folders you may safely erase unused lines (but need not), and if you have more you can add more lines with exactly the same format, just different Folder Names, Favicon Names and (if necessary) file extensions.

If you simply use userChrome.css as downloaded you will have a Bookmark Toolbar with folders identified by Favicons without names, but any folders in the drop-down lists will display one of my pre-assigned names:- F00 to F99. If you remove (or comment out with /* and */) the line starting #PlacesToolbarItems.... each folder in the Bookmark Toolbar will have its Folder Name beside it but, of course, there will be room for fewer icons in the toolbar.

Names as well as (Fewer) Icons in the Toolbar.

There are probably other possible variations, but I am not a particularly experienced programmer and, having done what I need for myself I have not spent time investigating additional possibilities.

I should like to acknowledge all the folk in various forums and elsewhere whose posts have helped me to solve this problem but the list is too long - thank you everyone who has posted on this topic, you may well have contributed to my fix, which is not particularly original, merely simplified for everyday users.